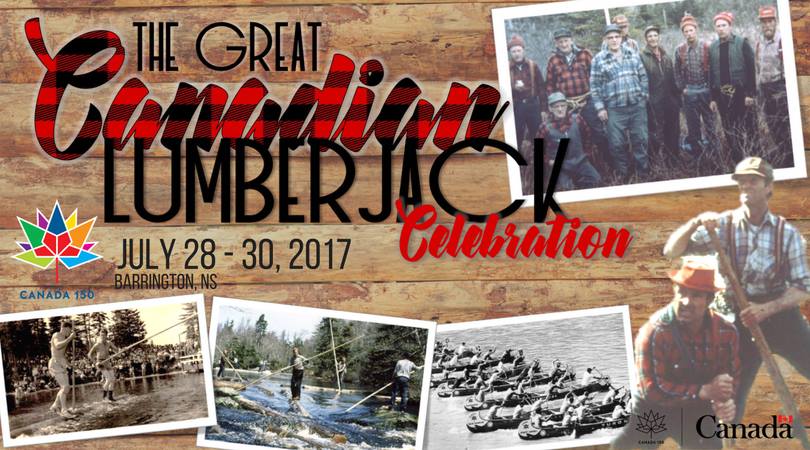 The Municipality of Barrington would like to extend an invitation to you to attend our Canada 150 event, The Great Canadian Lumberjack Celebration.
Put on your Lumberjack red plaid as we celebrate the importance of the lumber industry and our local lumberjacks and how they have helped shape our Nation and community. Nova Scotia has always had a rich history and culture in the logging industry, including the Municipality of Barrington. The Barrington River was used for log driving, sending logs down the river to be milled in large part for the shipbuilding industry in Nova Scotia.
Long before the time of mechanization, lumberjacks would stay in logging camps all winter, until the spring, sawing, chopping, hauling, sometimes climbing and eventually rolling the timber down the river. When the logs arrived to the mill in the spring, celebrations would be held in the form of a competition where lumberjacks could demonstrate their acquired skills. In Shelburne County, the Beaverdam Sports Meet which originated from the Nova Scotia Guides, and later brought in the woodmens competitions, attracted thousands of people each year to compete and watch the excitement!

Bring your family and friends, as we celebrate The Great Canadian Lumberjack!
Hope to see you here!

Join us as we screen The National Film Board of Canada’s The Last Log Drive. In 1983, during the bicentennial celebration of the settlement of Shelburne, Nova Scotia, by United Empire Loyalists, an old-time log drive was held on the Barrington River. This unique event was revived under the direction of Phil Scott, a former champion log roller and an articulate advocate of the sport. As well as being a spectacular visual experience, the log drive is an event of cultural and historical significance. The film brings to life this old practice of the logging industry in Canada. Following the screening, listen to stories and songs from the Log Drivers themselves!


Saturday, July 29 – 9AM – 6PM
Tribute to the Beaverdam Sports Meet

We are bringing some of Team Nova Scotia back together as they share their stories from the 1967 Centennial Canoe Pageant, the world’s longest canoe paddle! In 1967 as part of Canada's Centennial celebrations, teams representing eight provinces, Yukon and the Northwest Territories spent 104 days paddling across our great Nation. The race called the Centennial Voyageur Canoe Pageant started at Rocky Mountain House, AB on May 24 and ended on Sept. 4 at Expo '67 on the St. Lawrence River in Montreal.
Six paddlers paddled at a time, the paddlers' goal was to promote the voyageurs' contribution to Canadian history. The 104-day race, which tested the paddlers' stamina, endurance and courage and "stirred the hearts of Canadians." The 10 teams paddled 60 to 65 strokes per minute for up to eight hours at a stretch -- without breaking for lunch or to relieve themselves.
Oppressive heat, rain, prairie dust storms and ferocious headwinds dogged them the length of the route. Aching muscles, blisters and dehydration also took a heavy toll. And then there was more than 110 km of portages over rocky ridges, through hip-deep muck that was infested with blackflies and mosquitoes and along paved roads.
Join us, as members of Team Nova Scotia, Phil Scott, Richard Gerrior, Gerry Jamieson, Shawn Hadley and Tony Navratil recount their journey of this monumental event.

Relive the hay day of the Beaverdam Sports Meet! The Juniors Edition will introduce the next generation to the traditional lumberjack sports, get them disconnected from technology and “logged” on to nature!
Canoe Races, sawing, logrolling, axe throwing & moose call! Pre-register to compete!

The famous Scott’s Family Timber Show will perform two shows, showcasing the lumberjack sport and how it has pertained to the history of the lumber industry in Barrington and Canada. Featuring World Class Lumberjacks and World Champions, the Scott’s Timber Show is aimed to excite and thrill the young and old! No two shows are alike and for this celebration, they will put on a show like no other!